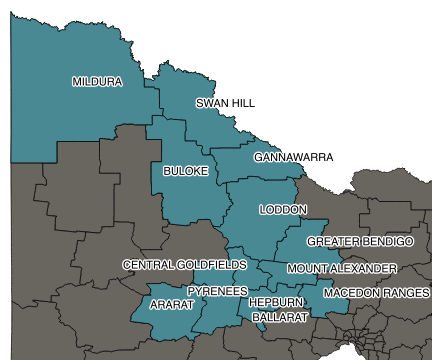 The CVGA works across Central and Northern Victoria to support local government with climate change mitigation and adaptation activities. We represent 13 councils and help them to develop and implement innovative regional initiatives to benefit their local communities and the economy.

Since our launch in 2001, the Alliance has facilitated numerous large scale projects and these continue to have a positive impact in the community. Over the past five years, the Alliance has led projects worth over $50m worth in our region. We advocate on behalf of our member councils to ensure the voice of  local government is heard strongly in state and federal policy settings.

CVGA members have access to networking opportunities and practices through regular events, working groups, newsletters and an annual conference. The CVGA is one of the Local Government Alliances in Victoria representing 75 of the state’s 79 Councils.

In June 2000, representatives of the Department of Natural Resources and Environment, the North Central Catchment Management Authority and the Latrobe University Bendigo formed the Central Victorian Greenhouse Alliance, the first of its kind in Victoria, to prepare a community based regional response to the problem of global warming.